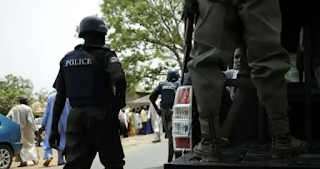 Four members of a grave scavenging syndicate were over the weekend caught in possession of human heads in Akure, the Ondo State capital.

The grave-diggers, Olomofe, 45; Adewale Abiodun, 40; Akinola Sunday, 69; and Oluwadare Idowu 67 who were workers at a public cemetery owned by Akure South Local Government along Imafon road, Akure were nabbed while trying to severe the head of a newly buried corpse.

The four suspects are already cooling off in the police net after being quizzed by detectives at the Ondo State Police Command.

It was gathered that on May 23, 2020, the suspects had tried to exhume the corpse of a young tipper driver buried a few hours earlier on that day.

The bubble burst for the grave digging syndicate after some of the bereaved came back to the cemetery a few hours after they left to make arrangements towards cementing the grave.

According to a family member who craved anonymity the criminals were also caught in possession of a female human head and four other fresh severed heads.

“It was when we caught them in the act that we started beating them and we discovered that they were in possession of other human heads.

“We immediately contacted men of the Special Anti-Robbery Squad (SARS) who came to pick them up.”

Meanwhile, residents of the community have appealed to both the local and state government to relocate the cemetery from the area.

According to them, such facilities should not be found within urban centres due to the health risks and other societal danger it portends.

Confirming the incident, the spokesperson of the Ondo State Police Command, ASP Tee-Leo Ikoro said that investigation had begun into the matter towards unraveling other members of the syndicate.

While assuring of diligent prosecution of the case, ASP Ikoro said, “the ongoing investigation will reveal everything, particularly other members of the gang.

“From what we have found out, it shows that it’s not their first time. It’s something they have been doing, it’s a routine thing.

“Like we always hear, very many days for the thief, one day for the owner. I think this time, their cup is full,” Ikoro stated.