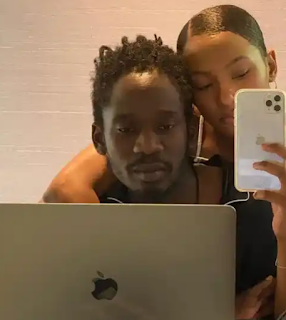 Billionaire daughter Temi Otedola is definitely having fun in her relationship with Nigerian singer Mr Eazi.

She never misses an opportunity to show off her love for the singer on her social media pages. And this is to the envy of other people online. Recently, she took to her official Instagram page to share a photo of them.

In the photo, Mr Eazi was working on his laptop while Temi leaned in on him with her phone to her face.

The singer and his fashion blogger girlfriend were sharing a romantic moment and she flaunted the photo online. In the caption that accompanied the photo, Temi said that she would never give up on her loving boyfriend.

As expected, fans and followers took to her comment section to celebrate the lovebirds.

There were beautiful reactions to their photo but one stood out from them all and that was the comment from Temi’s sister, DJ Cuppy.

According to her, Temi and Mr Eazi are starting to look alike. 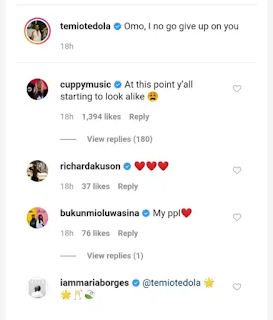